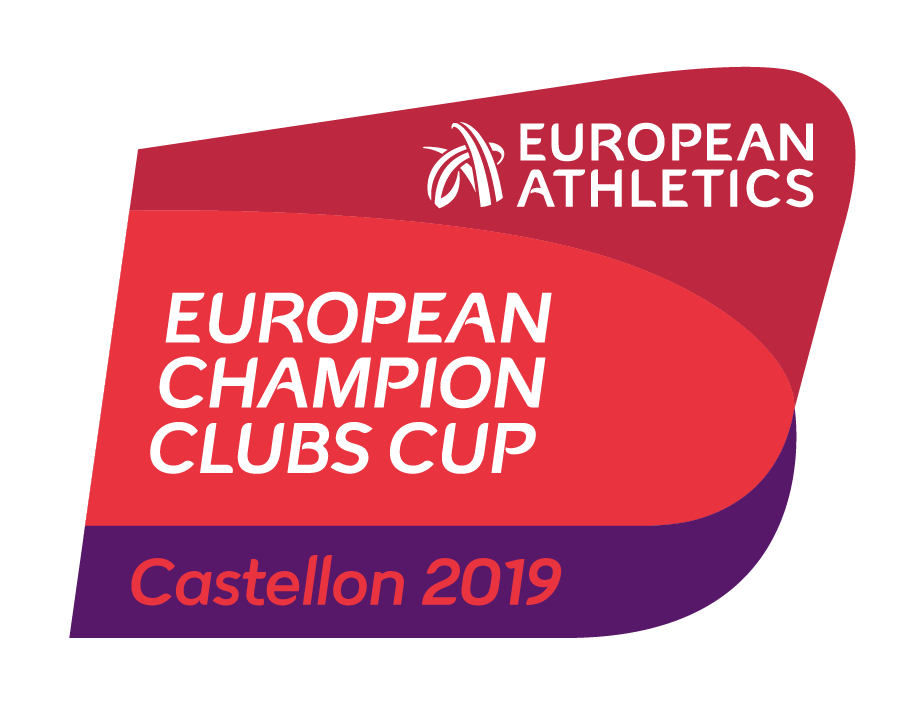 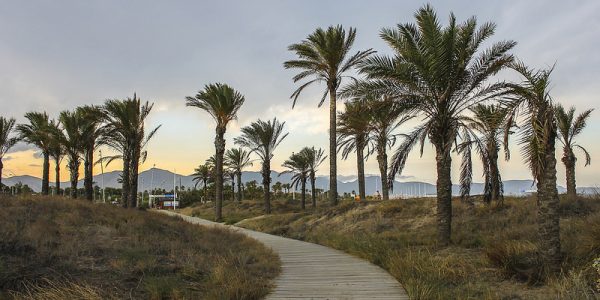 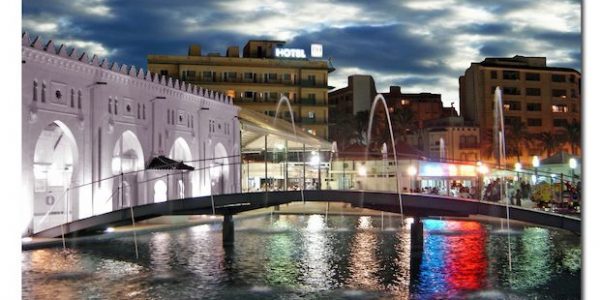 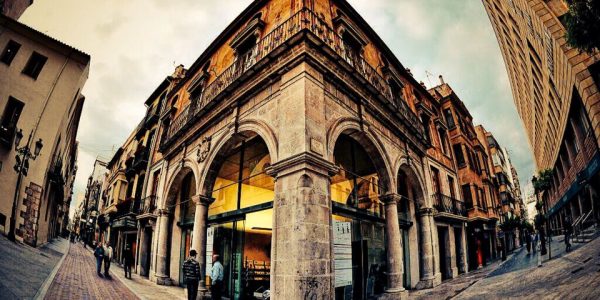 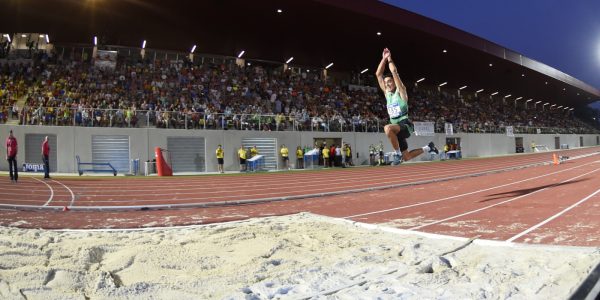 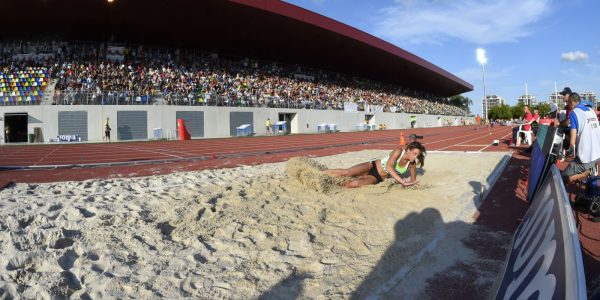 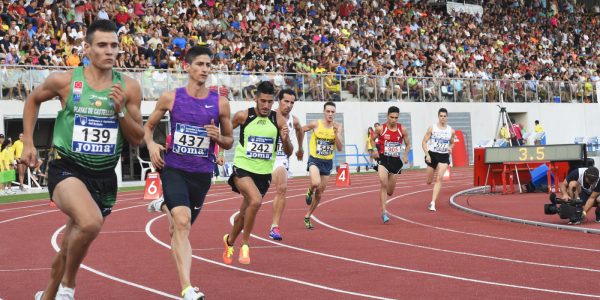 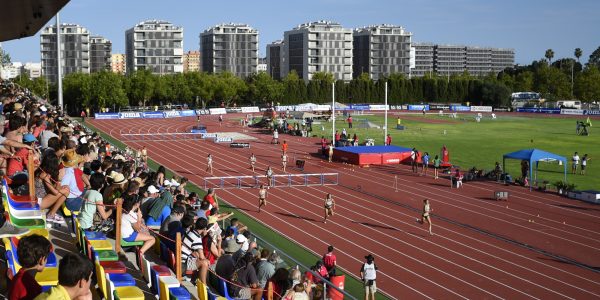 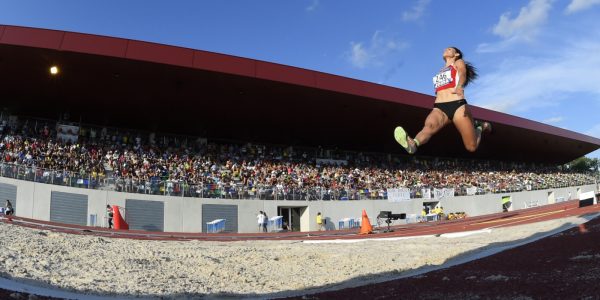 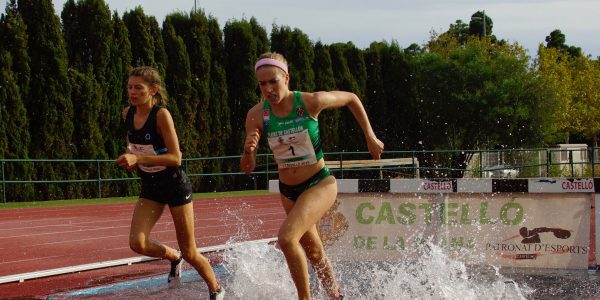 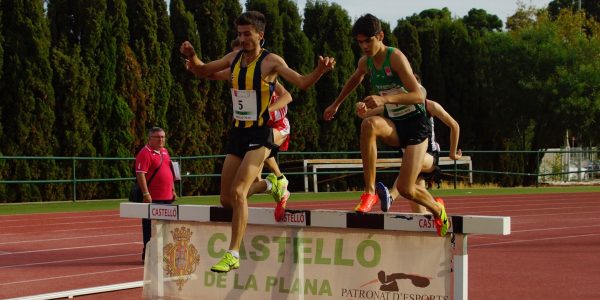 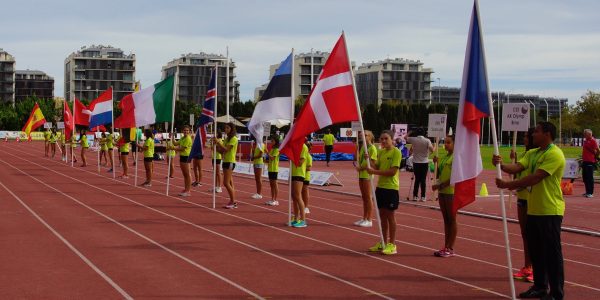 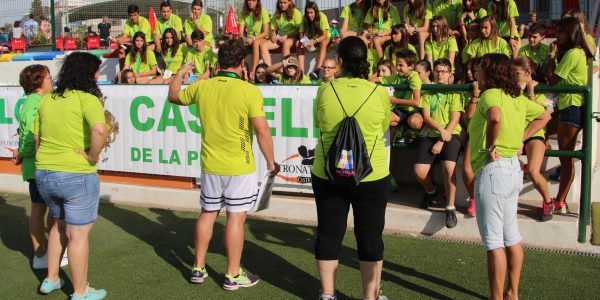 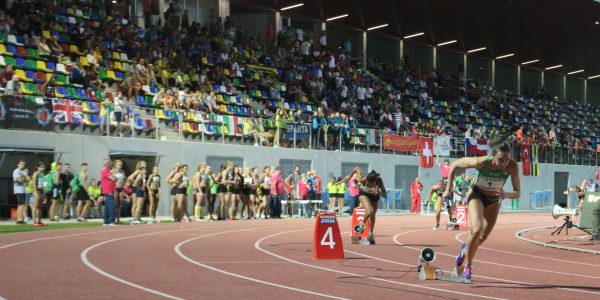 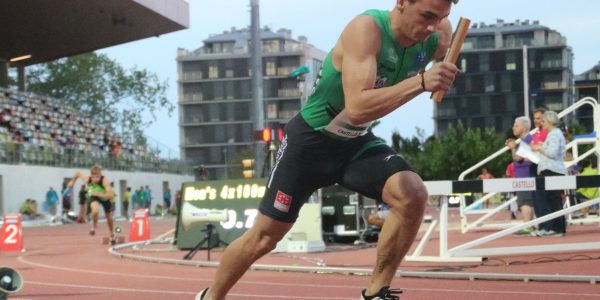 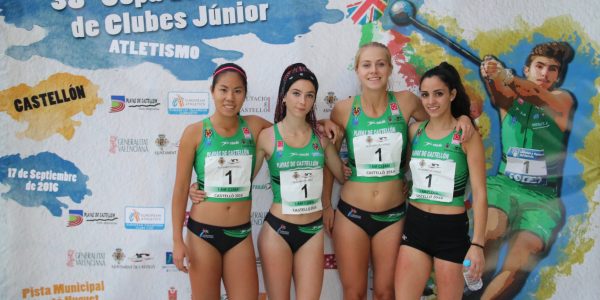 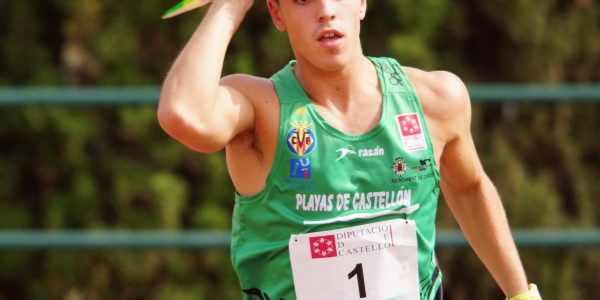 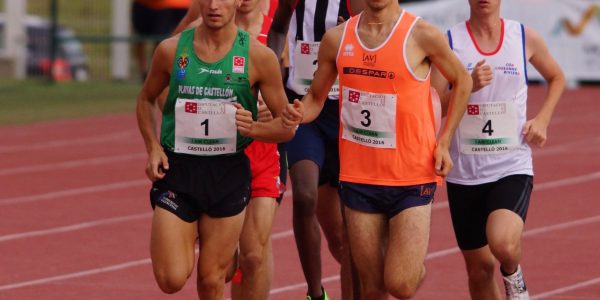 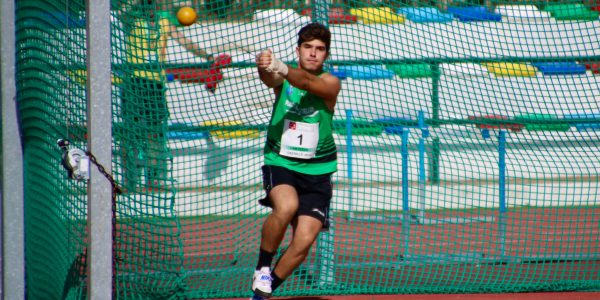 Castellón de La Plana is a medieval town located between the Mediterranean and the mountain of Desert de les Palmas, on the Costa de Azahar in eastern Spain.

The capital of the county of La Plana, situated on the Costa del Azahar, has countless attractions. Many squares in which to enjoy its gentle temperatures, gardens with orange trees and a walk leading down to the sea fill this city of medieval origin. Aristocratic houses and beautiful churches draw you to the eastern city, a good starting point for getting to know part of the Spanish coast.

The perfect union between the mountains and the sea can be found in Castellón. Over 120 kilometres of coastline and some of the most fascinating beaches in the Region of Valencia. Crystal clear waters and a mild climate caress this stretch of coastline, peppered with lively towns that offer plenty of activity all year round. Benicassim, Oropesa del Mar, Peñíscola and Castellón de la Plana, offer visitors a rich historical and cultural heritage.

The diversity of Castellón is also tucked away in the land and marine ecosystems of its eight natural parks. Indescribably beautiful landscapes and trails that offer adventure and tranquillity and a broad selection of high quality rural tourism activities that reveal picturesque towns and villages and medieval jewels such as Morella.

Seen from the outside, entering from any of the city’s accesses – a municipal pledge and important challenge at the moment- the city of Castellón de la Plana presents an aspect in which one can only imagine the traces of a the previously walled area, delimited and raised a century after its foundation, which was soon overflowed by the growing areas on its exterior until the end of the XVIII century when the walls were brought down and the city’s current urban development centers were established. They are open and luminous, extensive and flat, and make the XVIII century Castellón’s historical peak with the appearance of beautiful artistic forms in churches and public buildings, in addition to great demographic and economic expansion that begins to bring life to the city and took off with the beginning of the industrialization and commercialization of hemp.

A city which even today, despite the servitude that comes with development, preserves its provincial charm along with its nobility, its endearing traditions, its legends passed on from one generation to another, and even its own familiar and local mythology, such as the local mythical hero “ Tomba Tossals”.

In Lérida, on 6 of the ides of September, 1251 (a date that would be the equivalent to September, 8 1251 on our current calendar) Jaime (James) I extended a document in which he authorized Ximén Pérez de Arenós, his lieutenant in the Kingdom of Valencia, to transfer Castellón from its original placement to the plain which he felt was more appropriate.

Traditional memoirs place the execution of the authorized transfer to be during Lent of the following year. This has always been valued by the people of Castellón in its exact interpretation for being the dawning moment of their existence in the new settlement of the Moorish farmstead of Benirabe and for that reason the memory of the move is associated with, it is known, with the annual celebration of the “romeria” (pilgrimage) to the chapel of Mary Magdalene, which is found next to the castle’s remote origins.

Twelve years before, in 1239, there was certainly the intention to found a new village (in this case the farmstead of Benimahomet) by means of a Settlement Charter granted by the first feudal lord that had Castellón, Sir Nuño Sancho, Lord of Rosellón. History had determined, nevertheless, that the birth of the new Castellón had to come from the hands of the Crown (today we would say the State), which means that it would have that to come by the way of liberties and not by means of conditioning factors or feudal subjugations.

It is already known that life in medieval Castellón had some fully urban characteristics, with a more important emphasis on artisan and commercial activities than on the rural dedication to the crop cultivation, which cost the village subsequent and growing development through the irrigation system with the water from the River Mijares.

An example of the royal push for economic development, we recall that on March 16, 1260 James I authorized the construction of a road to link the village to the sea, where pre-roman civilizations had existed and maritime traffic was budding at the time. It was the precursor for the future port.

A document dated February 17, 1272 authorized the enlargement of the urban center by adding a suburb that would cause the creation of both Enmedio and Arriba streets, showing the favorable effect of royal attention to the population growth of the new village. In Barcelona on February 7, 1284 the son and successor of James I, Pedro (Peter) III the Great granted the village of Castellón the power to govern themselves through the concession of the right to possess its own municipal bodies. The medieval idea that “city air makes men free” could be applied to Castellón.

Castellón assumed since the XIV century the seat of government, and with it a capital role has not abandoned him over several centuries.

But history is not a dead and inert memory, but a live testimony to the flow of generations that do not cease to come after one other or to be renewed without losing the reference of a common past.

From September 8, 1251 until today, only a single and unique historic event has occurred that has had as the town of Castellón as its protagonist , continually changing in its individuals by law of life, but always the same in its common origin and common ambitions.

A long and slow procession of days and years; a continuous sedimentation of men and women of various origins but integrated in coinciding hopes; a series of crops (grapes, cane sugar, silk, hemp, orange, according to the varying circumstances of the agricultural economy), commercial and industrial businesses; artistic and cultural achievements; religious fervor; political changes: history flowing without ceasing.

A celebration to mark the 750th anniversary of James I‘s royal concession that is to be faithful to its own meaning and importance cannot be based on the mere archaeological evocation of an old historic episode, or only to be the occasional motive to celebrate a festival. It requires a reflection of the past as experience and toward the future as hope. In that document from 1251, all the implicit developmental capacity has made these past 750 years possible for our town, with alternation of events and sad occurrences, but always with a love of progress, work and freedom as a symbol of our identity.

Its fine golden sand make it to be one of the most visited beaches in this area, but its extension and width allow it to have a quiet atmosphere. It has amphibian chairs and all necessary services to make possible that people with reduced mobility can access the beach and the sea.

Enjoy more than 300 days of sun every year at Castellón – Costa Azahar. The low rainfall and average temperature of 18ºC make Castellón a great place to enjoy all year round.

Therefore, this is a Mediterranean climate with long summers and mild winters, enabling visitors to take part in many outdoor activities and enjoy what this charming Spanish province has to offer.

The Information Desks will be located in the lobby of Hotels with qualified personnel offering relevant information about all aspects of the European Champion Clubs Cup Track & Field Senior Group A.

The Information Desks opening hours will be as follows, from 23 to 27 May: 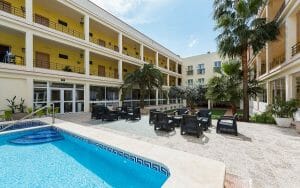 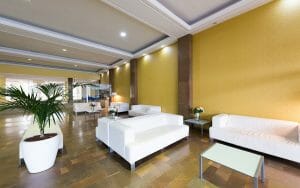 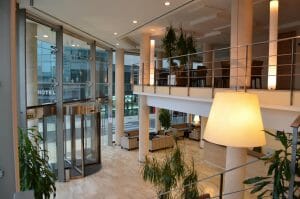 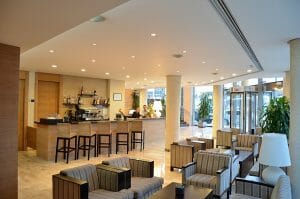 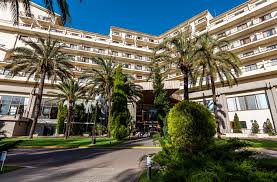 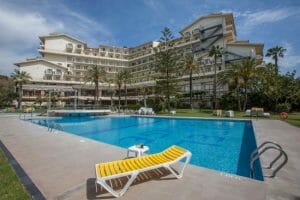 The LOC has reserved accommodation for all teams at the Hotel Del Golf, at Grao de Castellón, and Eurohotel Castelló, providing full board accommodation. The Hotel Del Golf is located approximately 10 km from Castellon centre and the competition venue. It is also approximately 300m from sandy beach. The Eurohotel Castelló is located in the walking distance from the city centre.

According to the competition regulations, you are asked to pay the registration fee of EUR 1000 (at the latest by the date of the closing preliminary entries – 20 February 2019) to the LOC’s bank account, with the details listed below.In addition, the clubs are required to pay a contribution for accommodation expenses apart from the aforementioned registration fee.
An amount of EUR 2400 shall be paid by each team to the organizer (by the bank transfer to the LOC’s account mentioned above or upon arrival on site at the latest) in order to partially support accommodation costs, considering three (3) night’s accommodation.
The LOC is to cover full board accommodation costs of each participating team for 3 (three) nights maximum, for the number of quota team members, which is 22 athletes and 4 officials per team.
The full board accommodation costs for out-of-quota team members and/or extra nights are the following (per night/person):
– EUR 80 in twin occupancy
– EUR 100 in single occupancy
Single room requests will be considered according to the availability.

All payments must be made in cash or by bank transfer.

An invoice will be sent in advance to each club detailing the amount they owe based on their final entries. Advance payments should be made in euros by bank transfer to the following account:

Note: A copy of the bank transfer will be required upon arrival.

The balance of the payment must be paid by the Team Leader on arrival at the hotel by cash in Euros.

The team leader must settle any extra charges (bar, laundry, telephone etc.) at the hotel reception desk, before departure. The team leader will be requested to provide a credit card at the time of checking in at the reception desk to cover any extras or eventual caused damage by the team.

Withdrawal of any confirmed athlete must be indicated to the TIC at the Stadium in writing on the official withdrawal form.

The stadium has the following competition sites:

The Warm up area has the following sites:

MAP
MAP OF THE STADIUM, COMPETITION FACILITIES, DRESSING AND PHYSIOTHERAPY ROOMS AND WORKROOMS

Please download and complete the form. Media Regulation and send to info@atletismecastello.es

To apply for your MEDIA accreditation, please fill in the form below  FORM

OFFICE OF THE ORGANISING COMMITTEE 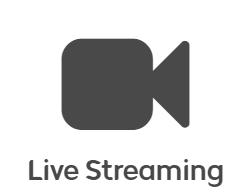 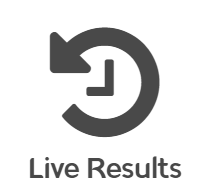 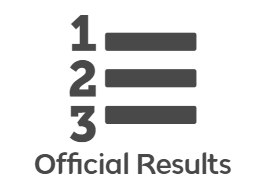